The SETUP: Step by Step

Click the pictures to go to the location of your choice

OVERVIEW OF THE SETUP

Hoover across the picture to identify essential components

GREAT!... You can start building the setup!
OEPS!... Contact the student assistent!

Now build your setup as pictured above. Please take care that the plugs are connected in the correct way.

The small red dot on each plug should be at the bottom (See picture on the right). Don't apply force to connect or rotate the plugs, this will damage the fragile pins inside. They should slide in with ease.

Use the connection layout below. Tigthen the cables and remember: "Vast is Vast".

Make sure the red dots are facing downward 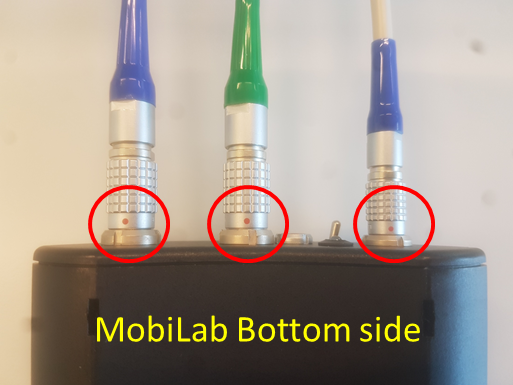 The layout of the MobiLab connections

To send markers from the laptop running the experiment to the EEG recording laptop, a Digital Input output box is needed. In these experiments we will use the National Instruments digital I/O 6501

NOTE: The drivers for this box are already installed on the 'onderwijslaptops'.

To do so Click the button on the right 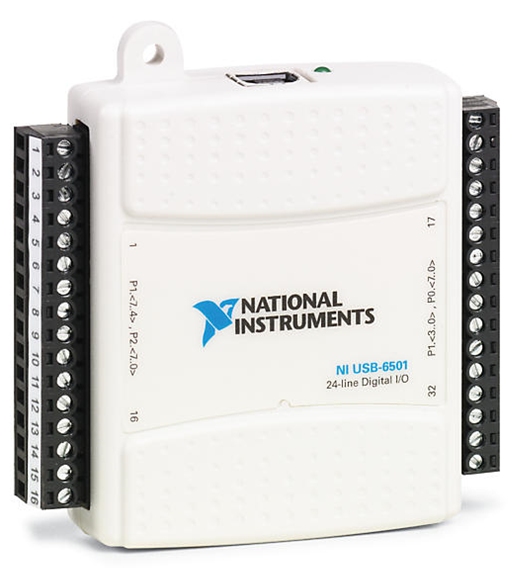 The Stimulus Presenter software enables you to trigger the DIO-Box and send markers to the EEG-recorder allowing you to synchronize behavioral events with your physiological data.

Use the Table below to make the connections.

Don't forget to connect GROUND: the purple wire to one of the GND ports on the DIO-box

Example of connections from Stimulus PC to Recording PC 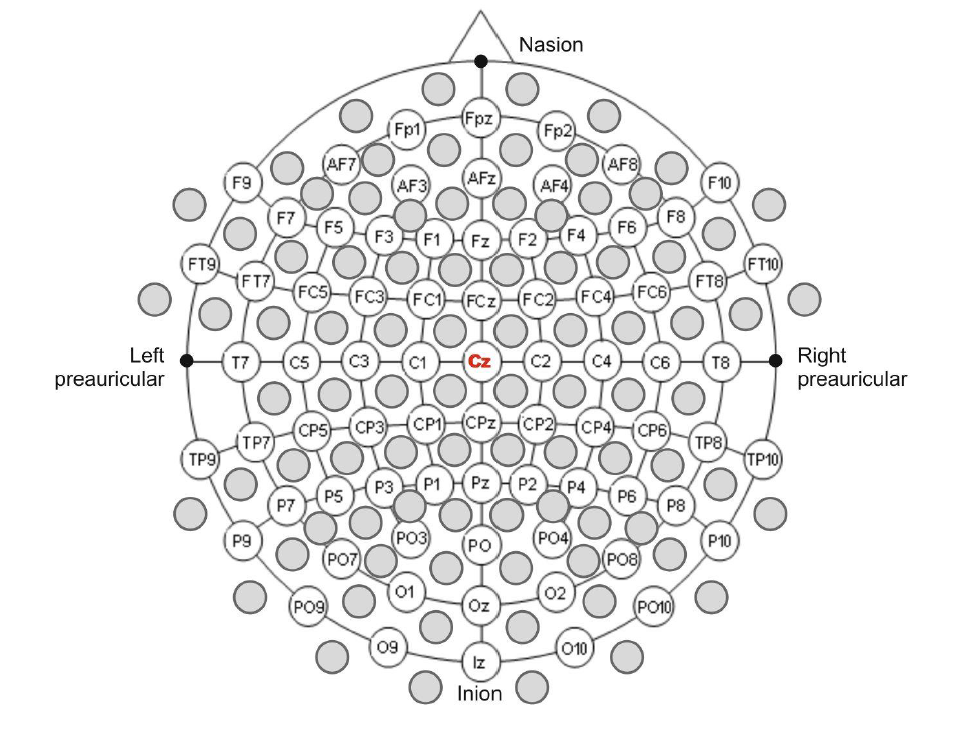 Search the literature before you select electrode locations.

You will have to decide where you want to measure. With two electrodes available to you and an optional extra six , you can't record all areas. So select your recording locations wisely.

For a reference, select literature that studied effects in a similar setting than yours and see where they placed the electrodes. Also you can use the electrodes on which they found the strongest effect.

Be very precise on what kind of effect you are looking for: using visual stimuli does not necessarily mean the effect will be found over the visual cortex. For example, if you use words or pictures with different meanings in different context the effect will more likely take place over the temporal cortex. Also auditory ERPs are best recorded on PZ and are less effectively recorded on lateral positions.

The best signal is often measured at other locations than directly over the brain area where it is generated. As it passes     through the skull and scalp it can be smeared out. The result of this is that EEG has low spatial selectivity (meaning it is hard to determine where exactly the measured signal comes from). On the upside, this also means that even if you place an electrode next to where the maximum effect actually is, you will still pick it up. Consequently, placing two electrodes right next to each other does not give you much more information. 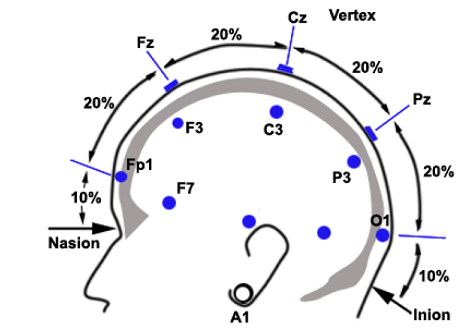 Select the cap size that fits your subject.

The red cap has a medium fit and fits most people. The blue cap is the largest, and the green cap is the smallest. The cap should be tight enough so the electrodes are close to the scalp but still comfortable for the subject to wear. Let the subject put on the cap.

Measure the head size of the subject from nasion to inion, and from the left tip of the ear to the tip of the right ear. The location of the Cz electrode should be in the center of these measures. Move the cap around if necessary and make sure it fits tight and symmetrical.

Now you are ready to gel the electrodes.

2: Place the tip of the syringe through the electrode on the skull. Ask the subject whether he/she feels the tip.

3: Apply the gel while retracting the syringe.

4: The reference electrode (blue clip) is gelled by appying a drop of gel on the metal electrode disk and place it on one of the ear lobes.

The EEG Recorder software is already downloaded and available on your EEG_Recorder laptop.

Download the most recent version of EEG_Recorder from CANVAS

Switch on your Mobilab amplifier 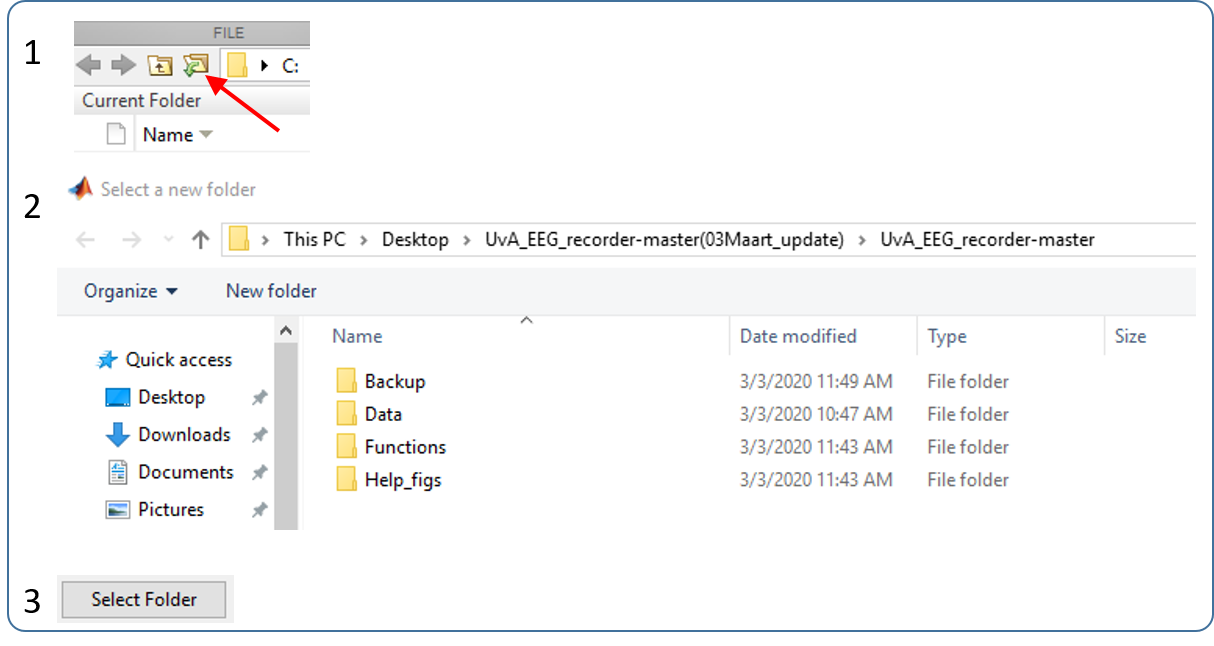 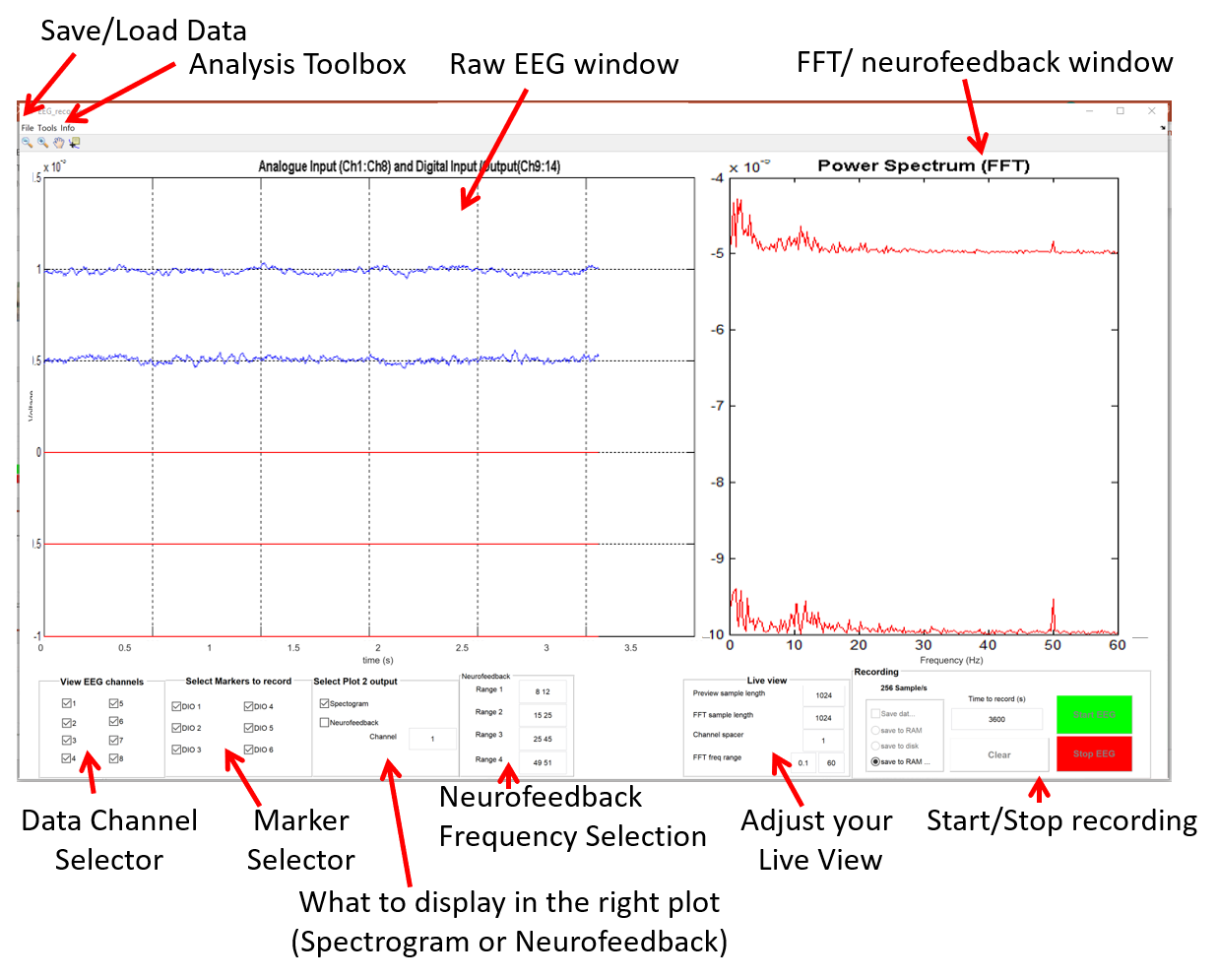 Data are only recorded to RAM (and optional to SD). To save data to disc use the save function.SAVE first, Discuss later! You can save to a location of your liking.

EEG recorder can also be used to view recorded data. If you do that here than the entire recording is plotted, including all 8 channels and the marker channels you selected. Also, In contrast to live view, the frequency plot on the right side of the screen is also generated using the entire recorded signal. It will be messy

If you want to visualize a single recorded channel, please select the DATA Plotter from the tools menu!

If you have the desire to replay and view the data as it was recorded, please select the REPLAY DATA option from the tools menu

The settings in this panel are for display purposes only, to accomodate inspection of the data during recording. They will NOT effect the recorded and saved data.

All these settings can be changed during the recording, it will NOT effect the recorded and saved data. 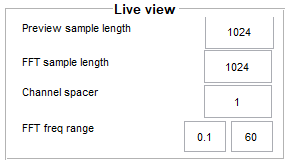 The number of samples that are plotted in the time domain window.

The number of samples that is used to generate the FFT (Fast Fourier Transformation) and plot the signal in the frequency domain. (Default = 1024 samples)

Set the range of frequencies that are plotted live in the powerspectrum window. (Default = 0.1 to 60 Hz).

Regardless of the selection: ALL EEG channels will be recorded and saved.

On the panel displayed on the right, only channels 1 - 4 are selected and are therefore visible during the recording, whereas all channels are recorded and saved

However, ONLY the selected Marker channels will be recorded and saved

In this case, No Marker (DIO) channels are selected. All Marker Channels are therefore Lost. By selecting marker channels, they become visible during the recording.

I just want to trouble shoot my Recording